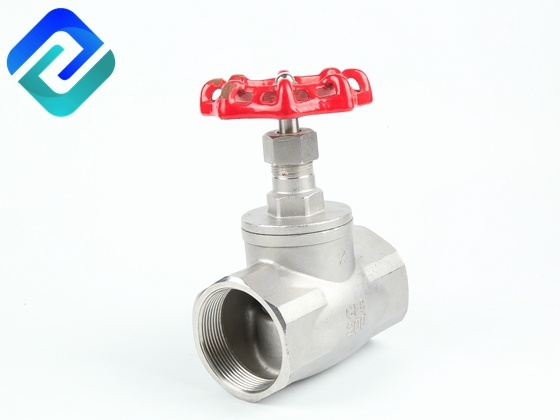 The opening and closing member of the internal thread gate valve is a plug-shaped valve flap having a flat or tapered surface, and the valve flap moves linearly along the center line of the fluid. The movement form of the valve stem has a lifting rod type (the valve stem is lifted and lowered, the hand wheel does not move up and down), and there is also a lifting rotary rod type (the hand wheel and the valve stem rotate together and the nut is set on the valve body). The tube stop valve is only suitable for full opening and full closing, and adjustment and throttling are not allowed.

Advantage of gate valve
The structure is simple, and the manufacturing and maintenance are convenient.
The working stroke is small and the opening and closing time is short.
The sealing performance is good, the friction between the sealing surfaces is small, and the service life is long.
Disadvantage of gate valve
The fluid resistance is large, and the force required to open and close is large.
Not suitable for media with particles, high viscosity, and easy to coke.
Poor adjustment performance.
The type of internal thread gate valve is divided into external thread type and internal thread type according to the position of the stem thread. According to the flow direction of the medium, there are straight-through, direct-current and angular. The shut-off valve is divided according to the sealing form, and there are a packing bellows gate valve and a bellows sealing globe valve.
Precautions of gate valve
The handwheel and handle operated tube stop valve can be installed anywhere on the pipe.
Handwheels, handles and transmission mechanisms are not allowed to be used for lifting.
The flow direction of the medium should be the same as the direction of the arrow shown in the valve body.
Internal thread gate valve, also called gate, is the most widely used type of valve. It is popular because it has a small friction between the sealing surfaces during opening and closing, is relatively durable, and has a small opening height and is easy to manufacture. Easy to maintain, not only for medium and low pressure, but also for high pressure. Its closing principle is that, relying on the pressure of the valve bar, the sealing surface of the valve disc and the sealing surface of the valve seat are closely fitted to prevent the medium from flowing.
The internal thread gate valve only allows the medium to flow in one direction and is directional when installed. Its structural length is greater than the gate valve, and the fluid resistance is large. When it is used for a long time, the sealing reliability is not strong.

You can email us

Please tell us what you need

Our engineers will contact you within 12 hours and provide free proposal and quotation.